We receive and resolve complaints from individuals who have been denied access to, or the correction of, their records of personal health information.

We receive and resolve complaints about PHIPA contraventions, such as unauthorized disclosures of personal health information.

We investigate privacy breaches that are reported to us by health information custodians (custodian) to remedy or contain the breach and prevent future occurrences.

We have the authority to initiate our own investigation of potential PHIPA contraventions. For example, we may initiate an investigation if we learn about a privacy breach, such as the discovery of abandoned medical records, even where we learn about it from an unaffected party. Investigations are also conducted when there are large-scale or systemic contraventions of PHIPA, and it would not be practical to address each complaint separately.

STAGES OF OUR PHIPA PROCESS

There are three stages to the IPC’s PHIPA process:

All new files begin at the intake stage, where we:

After intake, a file either moves on to investigation/mediation or it is closed.  If a file is closed, a letter is sent to the parties explaining our decision to close it.  We do not publish this letter.

In some cases, urgent files are either adjudicated (decided) at the intake stage or proceed directly to the adjudication stage.

If we receive a complaint, a mediator is assigned to the file to help resolve the issues under dispute. If we initiate our own investigation or receive a breach report from a custodian, an investigator determines whether we are satisfied with the response to the breach. In both circumstances, the investigator/mediator gathers relevant facts.

At the end of the investigation/mediation stage, a file can be:

At this stage, we adjudicate the issues under dispute.

During the adjudication stage: 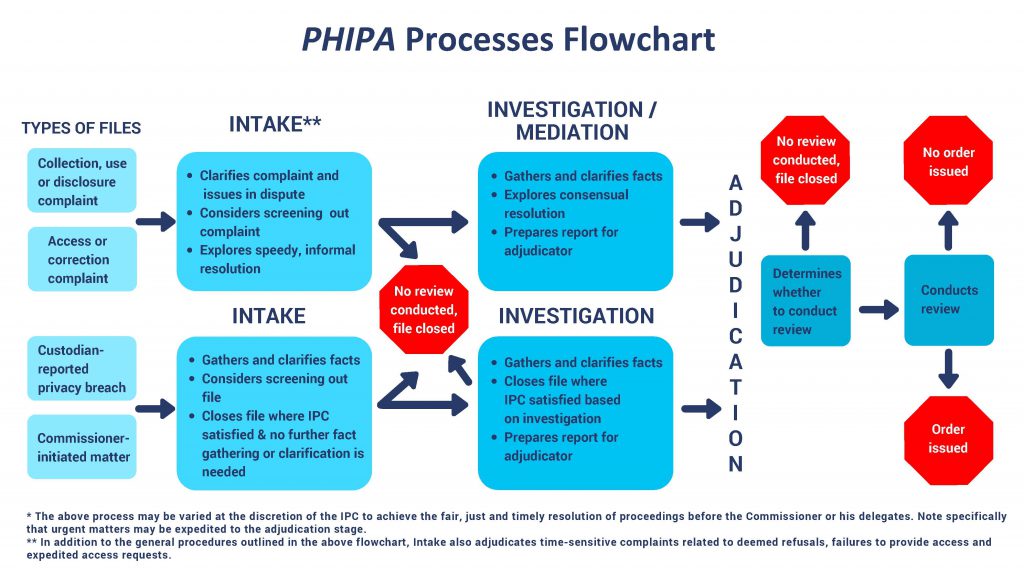 Copyright © Information and Privacy Commissioner of Ontario. All rights reserved.