An appeal and the applicable appeal fee must be sent in writing to the Registrar within 30 days after the institution has given notice of its decision.

There are three stages in an appeal. For detailed information on each stage, please refer the IPC’s Code of Procedure.

The first of three main stages of the appeal process in which the Registrar or Intake Analyst attempts to resolve the appeal informally, dismiss the appeal or prepare the appeal file for the Mediation or Adjudication stage.

The Mediator investigates the circumstances of an appeal and attempts to effect a settlement of some or all the issues. An appeal streamed to the Mediation stage may be further streamed according to its unique needs.

The Adjudication stage is the third of three main stages of the appeal process in which an Adjudicator conducts an inquiry disposing of all of the remaining issues in an appeal.

At each stage in the appeal process, the appeal might be resolved in the following ways: 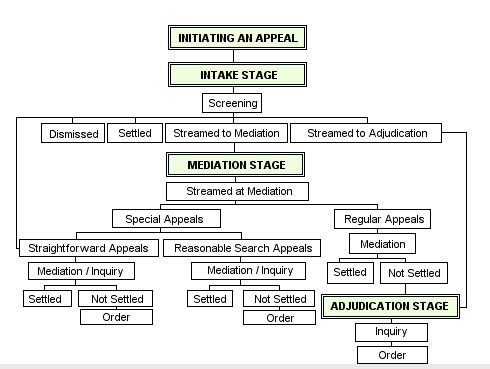